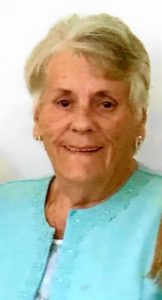 Mrs. Gladys R. (Foreman) Peffer, 82, of Ellwood City passed away peacefully on Monday, July 1, 2019 at her home of natural causes.

Gladys was born on April 30, 1937 in Ellwood City to the late Frank and Ruth (McMunn) Foreman. She was an avid bowler in local women’s leagues for many years receiving many trophies and awards. She worked as a part time cook at the Shelby and New Deal bars in Ellwood City and was famous for her lamb on the rod and special wing sauce recipe. She was a humorous person that was quick witted and always made everyone laugh. She enjoyed many years camping with her husband Pat, and she enjoyed spending time with her family. In recent years she resided at R.J. Schill Manor where she had many supportive friends.

She was preceded in death by her parents, her husband Patsy Morello, her brothers, Raymond, Ralph, Earl, Gerald, Merle, and Russel Foreman, and her sisters, Marion Blinn, Etta Wahlen, Alice Baker, and Elma Jean Foreman.

Visitation will be held on Saturday from 2:00 pm until the time of the service at 6:00 pm at the Samuel Teolis Funeral Home and Crematory Inc. with Pastor Marvin Mayle officiating. A private family burial will take place on Sunday at the Locust Grove Cemetery.

Memorial contributions in Gladys name may be made to the American Diabetes Association.