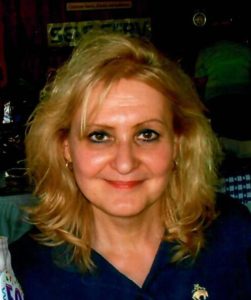 Mrs. Haberman was born on August 31, 1948 in Braunschweig, Germany to the late Tadeusz and Julia (Zoltak) Twarowski. She had graduated from Catholic School in Lawrenceville, and later from Nursing School where she earned her certification as an LPN. During the 1980’s, Grace worked at Mercy Hospital in Pittsburgh as an LPN. She is a member of the Holy Redeemer Parish and the Holy Redeemer Christian Mothers. She also was a member of the Legion of Mary and the Mystical Rose Society. Grace loved all animals, and enjoyed art and reading.

She is survived by her daughter, Krystyna Haberman (Jimmy Rose) of Pittsburgh, her son, Jamie Haberman III (Kim Toennies) of New York, NY, her sisters, Diane A. (Steve) Nowocien Sr. and their son Steve Nowocien Jr. of Verona, and Stasia Twarowska of Pittsburgh,  her brother, Jan Twarowski and his partner Demond Lovelace of Washington D.C. and Jerry Misiaszek. She is also survived by her brother-in-law, Steve Haberman and his girlfriend Terry Sendek of Fombell.

She was preceded in death by her parents and her husband George J. “Jim” Haberman II whom she married on August 23, 1980 and passed away on December 20, 2018.

Visitation will be held on Wednesday from 2-4 and 6-8 pm at the Samuel Teolis Funeral Home and Crematory Inc.. A mass of Christian burial will be held on Thursday at 10:00 am at the Holy Redeemer Church. Entombment will be at the St. Stanislaus Cemetery in Pittsburgh.

Memorial contributions in Mrs. Haberman’s name may be made to the Beaver County Humane Society.