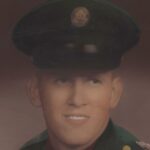 Mr. Daufen was born in Ellwood City on November 6th, 1946 to the late Carl E. “Granny” and Pearl O. (Herold) Daufen, Sr.. He is a member of the Riverside High School graduating class of 1966. He enlisted with the U.S. Army on September 14th, 1966 and served during the Vietnam War until his discharge on September 13th, 1968 with the rank of SP4. Following his service with the Army, Harry worked at Pullman Steel in Butler for a few years and then the Ellwood City Forge for 38 years as a machine operator. Harry also worked as a bartender at his fathers establishment, Daufen’s Grill.  He was a member of the former V.F.W. Post 157 in Ellwood City, and enjoyed gardening and going to auctions.

He was preceded in death by his parents, and his brother Louis Daufen

Visitation will be held on Thursday from 11:00 am until the time of the service at 2:00 pm at the Samuel Teolis Funeral Home and Crematory Inc. with Rev. R. Tod Custer officiating. Members of the Veterans Honor Guard are asked to meet at the funeral home on Thursday by 1:50 pm to conduct full military honors. Interment will be at the St. Marks Cemetery in Franklin Twp..