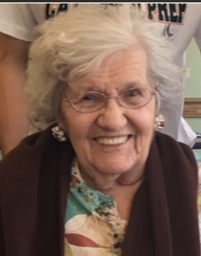 Mrs. Rocco was born on April 17, 1922 in New Castle to the late Anton and Emma (Kline) Schultz. She had worked for many years at Airway Luggage in West Pittsburgh. While living in Shenango Twp., Helen was a member of the Emmanuel United Methodist Church and the Amvets Ladies Auxiliary.

She is survived by her granddaughters, Bobbie Jo (David) Mahaffey and Billie Jo (David) Ziacik, her 14 great-grandchildren, her sister, Ruth Smelzer of Cleveland, her special niece, Linda Cain of New Castle, along with several other nieces and nephews.

She was preceded in death by her parents, her first husband, Alexander A. Aldan, Sr., her second husband, Floyd S. Rocco, her daughter, Sharon Floyd, her son, Alexander Aldan, Jr., her son-in-law, George Floyd, her grandchildren, Dean Wesley Floyd and Frankie L. Sieler, her sisters, Lydia Cain and Esther Flechsig, and her brothers, Alfred, John, and Henry Schultz.

Visitation will be held on Sunday from 4-7 pm at the Samuel Teolis Funeral Home, Inc. and Cremation Services. A private family service will be held on Monday at the funeral home. Interment will be at the Locust Grove Cemetery.