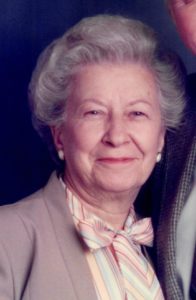 Mrs. Ungham was born on June 6, 1919 in Ellwood City to the late Zack and Elizabeth Cristea Brandes, Sr.. She graduated from Lincoln High School with the class of 1937 and was the class Valedictorian. She had worked at the former Ellwood City Federal Savings and Loan. Helen was one of the banks first female bank tellers. She was a very active member of the St. Elias Romanian Orthodox Church, and the Romanian Aid Society.  She also enjoyed playing cards, reading, cooking, and spending many winters in Bradenton, FL.

She was preceded in death by her parents, her husband George J. Ungham whom she married on August 9, 1941 and passed away on April 16, 2008, her sister Aurelia “Irene” Buner, and her brother Zack Brandes, Jr.

Visitation will be held on Friday from 5-8 pm in the Samuel Teolis Funeral Home, Inc., Saracusta service will be held on Friday at 7:30 pm, and on Saturday from 10:00 am until the time of the service at 11:00 am in the St. Elias Romanian Orthodox Church with Father John Schmidt officiating. Interment will follow at the Locust Grove Cemetery.