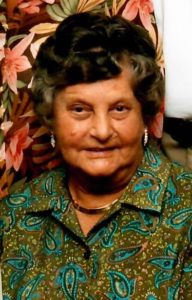 Mrs. Hilda K. Blaskowitz, 92, formerly of Big Beaver returned home to reside with the Lord on Saturday, December 28, 2019 at the Beaver Valley Nursing and Rehabilitation Center.

Mrs. Blaskowitz was born on November 17, 1927 in Beaver Falls to the late Edward  and Kathryn (Pavlinich) Abert. She had worked at the Holiday Inn in Beaver Falls for 24 years as the housekeeper supervisor.  Hilda had attended St. Theresa’s Roman Catholic Church (Queen of Heaven) in Koppel until it closed and presently is a member of the Holy Redeemer Parish. She enjoyed traveling to casinos with her husband, gardening, jigsaw puzzles, cooking, and baking with her specialty being home made pizzas. Hilda also enjoyed feeding the birds at Cambridge Village where she has resided for the past few years.

She is survived by her daughters, Karen M. (Charles) Young and Kathleen (Gary) Crawford both of South Beaver Twp., her sons, Frank (Linda) Blaskowitz of Beaver and Dennis Blaskowitz of Ellwood City, her grandchildren, Meghan, Todd, Tim, Marcy, Randy, and Ryan, and her eight great-grandchildren. She is also survived by her special and supportive sister, Connie Bissell of Chippewa and her nieces and nephews.

She was preceded in death by her parents, her husband, Frank J. Blaskowitz, Sr. whom she married on June 28, 1947 and passed away on August 13, 2014, her sister, Betty Trivilino, her brothers, John and Don Abert, her grandson, Rick Blaskowitz, and her daughter-in-law, Emma Blaskowitz.

Mrs. Blaskowitz’s family would like to thank the staff of Cambridge Village for the wonderful care that they extended to her.

Memorial Contributions in Hilda’s name may be made to the charity of the donors choosing.