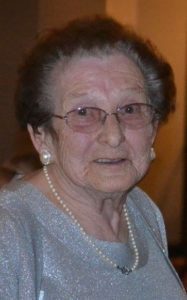 Mrs. Hildegard Rough, 90, of North Sewickley Twp. passed away on Tuesday, October 9, 2018 at the VNA Hospice of Butler.

Mrs. Rough was born on June 28, 1928 to the late Michael and Karoline (Grimm) Mesig in Heidelberg, Germany. She was educated in Germany before coming to the U.S.. For many years, Hildegard worked at the Ellwood City Hospital and later at the McGuire Home. She was a member of the German Women’s  Club of Ellwood City, and enjoyed cooking, baking, and traveling. Her greatest joy was spending time with her grandchildren, great-grandchildren, and great-great-grandchildren. She will be greatly missed by all that knew and loved her.

She was preceded in death by her parents, her husband, Harry J. Rough, Sr. whom she married on November 2, 1947 and passed away on February 8, 2000, her sons, Robert Rough and Terry Rough,  granddaughters; Tamra Rough and Brandy Rough, great-grandchildren, Jonas Rough and Marleigh Sims, son-in-law, Doyle Kent Butler, sisters, Elsa Baumbaur and Marie Feyeirabent,  brother, Herman Mesig. and her special friend, William Greco.

Hildegard wanted to extend a special thank you to all her neighbors and her dearest friends Alice DeGruttola and Jessica Kneisl and family for their kindness and love. Her family would also like to thank the Avalon Nursing Center and VNA of Butler doctors, nurses, and staff for the wonderful care that they gave to her.

As per Mrs. Rough’s wishes there will not be a public visitation or service. The funeral arrangements are entrusted to the Samuel Teolis Funeral Home Inc. and Cremation Services.

Memorial contributions in Mrs. Rough’s name may be made to the charity of the donors choosing.