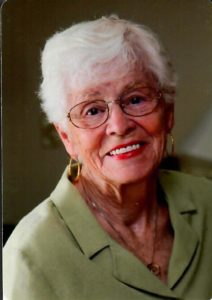 Mrs. Irene F. McCrumb (Brangers), 83 went to be with the Lord on Monday, May 6, 2019 at her home in Fombell. Mrs. McCrumb was born in Louisville KY to the late James Basil and Marcella (Olliges) Brangers. Mrs. McCrumb worked for the telephone company as a telephone operator. She met the love of her life, Chester Carlton McCrumb II, who precedes her in death, at a USO dance when he was stationed at Fort Knox, KY. They were married on Derby Day May 7, 1955.

Mrs. McCrumb was a talented artist and seamstress. She loved quilting, knitting, crocheting, gardening and most crafts. She joined St. Agatha Church when she relocated to Elwood City and was very active as Christian Mother’s and Eucharistic Minister. She worked along side her husband renovating apartments. Her favorite thing was family. She spent vacations with family in KY and winters in FL with her daughter’s family.

Visitation will be held on Friday from 5-8 pm at the Samuel Teolis Funeral Home and Crematory Inc.. A mass of Christian burial will be held on Saturday at 11:30 am at the Holy Redeemer Church with Father James Torquato officiating. Members of the Holy Redeemer Christian Mothers are asked to meet at the church on Saturday by 11:20 am to form an honor guard.

Memorial contributions in Mrs. McCrumb’s name may be made to the Holy Redeemer Angel Fund, or to the Alleghney Health Network, attn; Fasy M. Greery, 4818 Liberty Ave., Pittsburgh, Pa 15224, (fasy.greery@ahn.org).