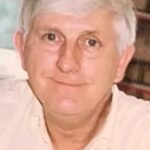 Mr. James C. Spielvogel, 87, of Wayne Twp. passed away at his residence on Sunday, October 23rd, 2022 and was reunited with his beloved dog Rommel.

Mr. Spielvogel was born on May 11th, 1935 in New Castle to the late George and Mary Rose (Delaney) Spielvogel. Jim is a member of the Lincoln High School class of 1954, and the Divine Grace Parish, Holy Redeemer Church. Following high school Jim served with the United States Navy from 1952 until his discharge in 1957 and was a 100% disabled veteran. He had served in the Navy reserves for 10 months prior to his regular service. After his service with the Navy, Jim worked as a pressman at various local newspapers retiring from the Beaver County Times. He enjoyed fishing, woodworking, watching the Pittsburgh Steeler’s with his sons, Ellwood City Football, and most of all being with his family and helping them.

He was preceded in death by his parents and brothers, Regis, Eddie, Francis, Eugene and Joseph Spielvogel.

Family and friends are invited to attend a mass of Christian burial for Jim on Wednesday at 1:30 pm at the Divine Grace Parish, Holy Redeemer Church with Father Jim Wehner officiating. Entombment will follow at the Holy Redeemer Cemetery, Holy Redeemer Mausoleum. Members of the Veterans Honor Guard are asked to meet at the Cemetery on Wednesday by 2:30 pm to conduct full military honors. The funeral arrangements are entrusted to the Samuel Teolis Funeral Home and Crematory Inc..

Memorial contributions in Mr. Spielvogel’s name may be made to the Disabled American Veterans.