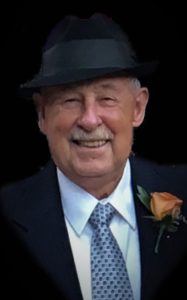 Mr. Norton was born in Beaver Falls on December 15th, 1933 to the late Hubert and Minnie (Spence) Norton. Jim is a member of the Lincoln High School class of 1952 and the Holy Redeemer Parish family. He enlisted with the U.S. Army on March 2nd, 1955 and served with the rank of SP 3 until his discharge on March 1st, 1957.  Jim had worked at J.C. Penny in Ellwood City, and then at the  Ellwood City Forge for 42 years as a crew leader. He also served as a Franklin Township Supervisor for 30 years.  For many years, Jim was a volunteer fireman with the Franklin Township Volunteer Fire Department and a member of the Western Pennsylvania Fireman’s Association. In his youth, Jim was a member of the Boy Scouts of America and earned his Eagle Scout rank and his Order of the Arrow membership. An outdoorsman, he enjoyed hunting, fishing, and golfing.

Visitation will be held on Monday from 2-4 and 6-8 pm at the Samuel Teolis Funeral Home and Crematory Inc.. A mass of Christian burial will be held on Tuesday at 10:00 am at the Holy Redeemer Church with Father Mark Thomas officiating. Interment will follow at the Holy Redeemer Cemetery. Those attending the funeral mass are asked to meet at the funeral home on Tuesday by 9:20 am. Members of the Veterans Honor Guard are sked to meet at the cemetery on Tuesday by 11:00 am to conduct full military honors.