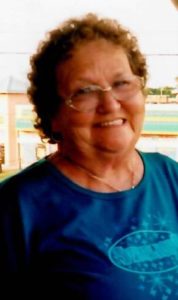 Mrs. Moldovan was born on December 3, 1936 in New Brighton to the late Boyd S. and Madge (Poe) Blinn. She had graduated from the New Brighton High School with the class of 1954. Jean had worked at the Kwik Fill in both Franklin Twp. and Zelienople as a manager, and later at Ellport Junction as a cashier. She was a member of the Koffee Klache Bowling League at the Park Lanes Bowling Alley, and enjoyed crocheting, painting, poetry, and drawing.

She was preceded in death by her parents, her husband, George A. Moldovan whom she married in 1960 and passed away in 1992, her daughter, Vicki Lynn Moldovan in 1966, her sisters, Betty Blinn in infancy and Beverly Wessel, and her brother, Boyd “Sonny” Blinn.

Visitation will be held on Tuesday from 5:00 pm until the time of the service at 8:00 pm at the Samuel Teolis Funeral Home, Inc. and Cremation Services with Rev. R. Tod Custer officiating. Interment will be at the Locust Grove Cemetery.

Memorial contributions in Mrs. Moldovan’s name may be made to the Leukemia Foundation or to the Alzheimer’s Foundation.