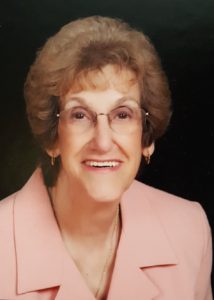 Mrs. Joann R. DeCarbo, 87, of Ellwood City passed away on Tuesday, April 27th, 2021 at her residence with her loving family at her bedside.

Mrs. DeCarbo was born on January 19, 1934 in Ellwood City to the late John and Rose A. (Colao) Pacella. She is a member of the Lincoln High School class of 1952. Joann had worked at Eiselen Drug Store which was on Wampum Avenue in Ellwood City as a clerk, for Ray Hoffman and later WKST radio station both as a bookkeeper, and ESB Bank as a teller. She is a member of the Holy Redeemer Parish, where she was a member of the Christian Mothers, the church choir, and a long time volunteer at the annual church bazaar. Joann belonged to the Mystical Rose Society and served as their secretary. She enjoyed crafts, baking, traveling, flower gardening, watching the Pittsburgh Penguins and Steelers, and most of all her grandchildren. She also had a passion for collecting and displaying her Christmas Village which included more than 100 miniature houses and businesses, with hundreds of tiny figures.

She was preceded in death by her parents, her sisters, Rita Bennett and Lena Demeter, her brothers, Frank, Charles, and Arthur Pacella, her daughter-in-law, Tina DeCarbo, and her son-in-law, Dennis Minnitti.

The family would like to thank the UPMC North West Hospice from UPMC Jameson Hospital, especially Pastor Marsha, Arlene, Val, Laura, and Taylor for the wonderful care they extended to Joann.

Memorial contributions in Mrs. DeCarbo’s name may be made to; St. Jude Children’s Research Hospital.