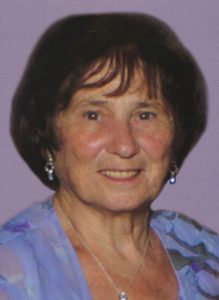 Joanne was born on October 13th, 1933 in Butler to the late Leo and Beulah (Ross) Manning. Joanne graduated from Butler High School. She worked at Brenda Moris Dress Shop in Butler, Romar Textile, Leeds and Northrup, and Ames Department Store at the Franklin Plaza.

Joanne is a member of the Holy Redeemer Parish and an active member of the Holy Redeemer Christian Mothers. Joanne delivered Meals-on-Wheels and was a member of Challenges and various card clubs. She also had belonged to the Municipal Women’s Club and was a long time volunteer for the Annual Holy Redeemer Bazaar. She loved spending time with her family, entertaining, and taking care of everyone. Joanne especially enjoyed working in her yard and playing cards with her family and friends. She was also an avid Pittsburgh Steelers and Pirates fan.

In addition to her parents and husbands, Joanne was preceded in death by her son, Richard Ottaviani on March 19th, 2015 and daughter-in-law Karen Ottaviani, sister, Florence Ottaviani, and brother, George Manning, brothers-in-law and sisters-in-law, Robert (Florence) Ottaviani, William (Toni) Ottaviani, and Sally Conte, and her father and mother-in-law, Joseph and Louise Ottaviani.

Visitation for family and friends will be held on Saturday, March 26th, 2022 from 1:00 pm until the time of the Blessing Service at 3:00 pm at the Samuel Teolis Funeral Home and Crematory Inc. with Father Mark Thomas officiating. Interment will be at the Holy Redeemer Cemetery.

The family would like to thank the staff at Northview Estates and Vitas Healthcare for their wonderful care.

Memorial contributions in Mrs. Ottaviani’s name may be made to the Holy Redeemer Angel Fund.