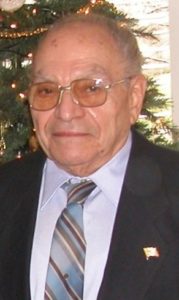 Mr. John Albert Manzetti, 93, of Franklin Twp. passed away on Wednesday, August 16, 2017 at the Heritage Valley Medical Center. John was a true part of the “Greatest Generation” and was the “real deal”.  He was a proud father of 2 boys, grandfather of 4 and great-grandfather of 5.

Mr. Manzetti was born on January 19, 1924 in Beaver Falls to the late Peter and Mary Trozzo Manzetti. John graduated from the Beaver Falls High School with the class of 1942.  He had served with the U.S. Army in 1945 during World War II.  John worked multiple jobs most of his life, often 2 or 3 at the same time, to provide for his family. He was retired 31 years after spending 34 years at Standard Steel Specialty Co. in West Mayfield, Pa. He also worked with his wife of 69 years, Evelyn L. Manzetti, at Manzetti’s Candies on College Hill in Beaver Falls. John and Evelyn were quite a team.  Before moving to Ellwood City, John was an active member of the St. Philomena’s Catholic Church in Beaver Falls. He enjoyed gardening, cooking, and watching western movies.

He was preceded in death by his parents, his wife Evelyn L. Docchio Manzetti whom he married on June 11, 1946 and passed away on October 18, 2015, his sister Margaret (Manzetti) Beegle, and his brothers Frank, Gene, George, Robert, and Richard Manzetti.

Visitation will be held on Sunday from 2-4 and 6-8 pm  in the Samuel Teolis Funeral Home, Inc. and Cremation Services.

Memorial contributions in Mr. Manzetti’s name may be made to the Passavant Retirement Community, 101 Burgess Dr., Zelienople, Pa 16063.