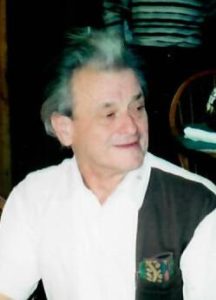 Mr. John E. Haine, 83, of Ellport passed away unexpectedly at his home on Thursday, May 23, 2019. Son of the late Harry and Amanda (Cable) Haine, brother of Don (Glenys) Haine, Dorothy Gunnett (deceased) and Marian Haine. Dear uncle, cousin, and friend to many. John grew up in Middle Lancaster where he attended a one room schoolhouse and later moved to Ellwood City, graduating in 1953 from Lincoln High School. He served his country in the U.S. Army from May 21, 1958 until May 6, 1960 and again from October 16, 1961 until August 7, 1962 with the Signal Corps. John was easy going and seemed to know everybody. His kindness and always friendly demeanor will be greatly missed.

He had worked as the manager of Park Lanes Bowling Alley for many years, and was an avid bowler having bowled a 300 game at Park Lanes. John was a member of the Ellwood City MOOSE Lodge #93, Fraternal Order of Eagles, DAV, Order of Owls, American Legion, and the Ellwood City Saxons Club.

Visitation will be held on Tuesday, June 4, 2019 at the Samuel Teolis Funeral Home and Crematory Inc. from 10:00 am until Noon at which time the funeral procession will proceed to the National Cemetery of the Alleghenies where a military funeral service and full military honors will be held at 2:00 pm.

Special thanks to his friends at Murphil Cleaners where John was currently employed.

For those who wish to make a donation in John’s memory, his family suggests the DAV or the Wounded Warrior Project.