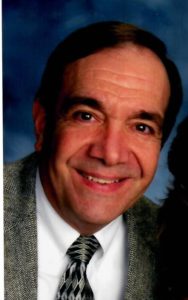 John Ottaviani, age 76, of Ellwood City, Pennsylvania, passed away Saturday, August 8, 2020, at 4:30 a.m. at his home surrounded by his loving family.

John was born on October 13, 1943, in Ellwood City, to Dario and Ann (Maiorano) Ottaviani. He was a 1961 graduate of Lincoln High School and a 1965 graduate of Youngstown State University with a B.S. in Business Administration. He was formerly employed at Mathews Conveyor, and Babcock & Wilcox. He retired from FedEx as a collections specialist in 2005.

John was married to the former Virginia Kathryn Ottobre. They recently observed their 40th wedding anniversary, as they were married July 5, 1980. In addition to his wife, he is survived by a son, Darin John Ottaviani of South Bend, IN. He is also survived by sisters-in-law: Pamela J. Ottaviani; Anita Ottobre (Jay Gettens) of Prospect; Deanna (Steve) Ottobre-Pierog of Akron, OH; and a brother-in-law Warren (Brenda) Ottobre of Westerville, OH; and by nephews and nieces Cory (Lauren) Ottaviani; Joshua Ottaviani; Heather (Gerald) Hoffman; Ryan Ottobre; Aaron Ninos; Jared (Jenny) Ninos; Cameron Ninos, and Dena and Derek Pierog. John is also survived by great-nieces and nephews: Ella and Cameron Ottaviani; Carter and Avery Hoffman; and Mariana and Luella Ninos.

In addition to his parents, he was preceded in death by his brother David J. Ottaviani in 2012, and his in-laws, Warren and Dena Ottobre.

John (like his father and uncles) was an avid golfer in his younger days and spent much of his leisure time watching golf on TV. He was also a loyal Pirates, Steelers, and Penguins fan. He enjoyed trips to the campuses of the University of Michigan and the University of Notre Dame for sporting events. John was a talented pianist playing by “ear.” He was a member of Babe Alfera’s “Classics.”
Their group performed for many years at the Eagles in New Castle and also at private parties and weddings. His most treasured moments, however, were spent in the company of his beloved wife and son.

In lieu of flowers, memorial donations may be made in John’s name to the Holy Redeemer Angel Fund or the American Cancer Society. John’s family would like to extend a special thanks to the AHN Hospice and Home Health team.