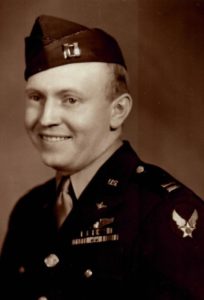 Mr. Joseph A. McCandless, 98, of Ellwood City passed away on Tuesday, January 14, 2020 at the Passavant Retirement Community in Zelienople.

Mr. McCandless was born on September 21, 1921 in Slippery Rock, Pa to the late Byron J. and Sylvia (Cooper) McCandless. He had graduated from Lincoln High School and Carnegie Tech with a Masters Degree in Civil Engineering. Mr. McCandless enlisted with the United States Army on May 23, 1942 and served with the Company A 807th Engineer Aviation Battalion until his discharge on October 22, 1947 with the rank of Captain. His military occupation consisted of both Bombardier and Single Engine Pilot. He took part in the Mandated Islands Campaign and the Air Offensive over Japan. He was awarded the Asiatic Pacific Theater Ribbon with 2 Bronze Stars, World War II Victory Medal, Distinguished Flying Cross, Air Medal with 2 Oak Leaf Clusters, and the American Theater Ribbon. Following his service with the Army, Mr. McCandless worked as an Engineer and Construction Inspector for his fathers business, B.J. McCandless Architect.

He was preceded in death by his parents, and his sister, Sara Jane McCandless.

Visitation will be held on Friday from 1:00 pm until the time of the Military Honors at 2:00 pm at the Samuel Teolis Funeral Home and Crematory Inc.. Interment will be at the Mt. Chestnut Cemetery in Butler. Members of the Veterans Honor Guard are asked to meet at the funeral home on Friday by 1:50 pm to conduct full military honors.