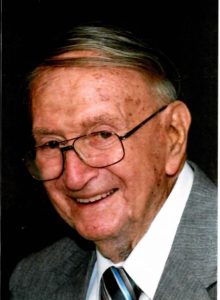 Mr. Nocera was born on September 7, 1923 in Ellwood City to the late Michael and Camilla (DiTommaso) Nocera. He had graduated from Lincoln High School and then enlisted with the U.S. Army on March 23, 1943. Joe served with the Battery “B” 557th Anti Aircraft Artillery Battalion 84th Division with the rank of Private First Class. He had fought in the battles of Northern France, Rhineland, and Central Europe, and was awarded the Good Conduct Medal, American Theater Medal, Victory Medal, Purple Heart Medal, and the European-African-Middle Eastern Theater Service Medal with 3 Bronze Stars. He was discharged from the army on December 18, 1945. Following his service with the army, Joe worked at the U.S. Steel National Tube Mill in Ellwood City until its closing. He then worked for Moody Brothers as an inspector until his retirement. Joe is a member of the Holy Redeemer Parish, Saxons Club, and the Sons of Italy #608. He cherished time spent with his grandchildren, and Sunday pasta dinners with his family.

He was preceded in death by his parents, his wife, Catherine “Katie” A. (Pistacchio) Nocera whom he married on September 21, 1946 and passed away on February 18, 2002, his son, David Nocera, his sisters, Rose DiCerbo and Nicoline Perrotta, and his brother, Louis J. Nocera.

Mr. Nocera’s family would like to thank the staff at Northview Estates and the Kindred Hospice for the wonderful care that they extended to Joe.

Memorial contributions in Mr. Nocera’s name may be made to the Holy Redeemer Angel Fund, or the Ellwood City Area Public Library.