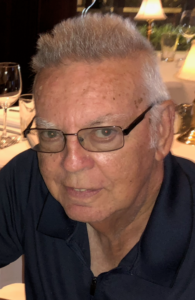 Mr. Carinci was born in Ellwood City on July 29, 1941 to the late Lorenzo “Lawrence” and Fanny (Rose) Carinci. He is a member of the Lincoln High School class of 1959. Following high school, Joseph enlisted with the U.S. Army and served from October of 1959 until his discharge in August of 1961 with the rank of Spec 4. Joseph then worked at the Babcock & Wilcox Steel Mill in Koppel until it closed. He enjoyed golf and bowling of which he rolled several 300 games. A man of faith, he will be remembered as a caring and loving father by his son Dan.

He is survived by his son, Daniel Carinci and his fiance’ Jodie Sweeney of Sewickley, and his brother, Larry (Phyllis) Carinci of Beaver Falls.

A graveside service for Mr. Carinci will be held on Saturday at the Locust Grove Cemetery with the Veterans Honor Guard conducting full military honors.