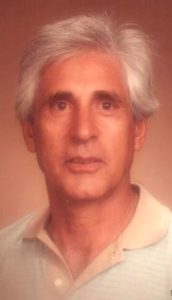 Mr. Joseph F. Cucunato, 93, formerly of Ellwood City passed away on Monday, May 15, 2017 at his residence in Cullman, Alabama.

Mr. Cucunato was born on April 21, 1924 in Richwood, West Virginia to the late Luigi and Josephine DeMasse Cucunato. He is a member of the Lincoln High School class of 1942.  He enlisted with the U.S. Army on March 11, 1943 and served with the Headquarter Company 2nd Battalion 109th Infantry Division until his discharge on July 20, 1945 with the rank of Private First Class. He was awarded the Cluster Purple Heart for being wounded on August 8, 1944 in the Battle of Southern France, the Good Conduct Medal, and the European African Middle Eastern Theater Medal. Joe worked at the U.S. Steel plant in Ellwood City in the stock house department as an expeditor until the mill closed. He then worked as a maintenance supervisor for the Pine Tree Gardens Home Owners Association. While living in Ellwood City he was a member of the Holy Redeemer Parish. Joe also belonged to the V.F.W., and the American Rifle Association.

Mr. Cucunato is survived by his wife Elva Box Cucunato whom he married on July 17, 1998, his step-son Michael Burkette, his sister Jaye (Domenic) Scopellite of Ellport, his sister-in-law Santina “Sunny” Cucunato of Ellwood City, and several nieces and nephews.

He was preceded in death by his parents, his sister Paula Toole Robbins, and his brothers, Frank and Paul Cucunato.

Visitation will be held on Thursday from 5-7 pm in the Samuel Teolis Funeral Home, Inc. and Cremation Services.