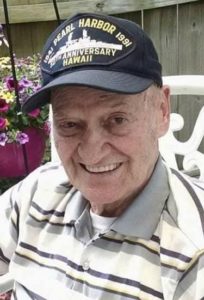 As a teen growing up during the Great Depression, he left home after his mother died to help support his family.  He worked with the Ringling Bros Circus and then became a part of Franklin Roosevelt’s fledgling Civilian Conservation Corps. He sent money home every month to his family.   At the CCC, he quickly rose through the ranks as a leader, and became a Three Stripe Major.  During his time there he traveled to Mexico, worked in Panama, and helped during the Johnstown Flood.  After four years in the CCC, he joined the Army in 1937.  He served as a drill instructor at many bases, before being stationed in Pearl Harbor.  On Dec 7 1941, Joe was training his men when the Japanese began the attack.  Joe was one of the first injured when his jeep was hit by shrapnel and he fell into a ravine.   During the war he continued to serve and won several medals including Three Bronze Stars for marksmanship.  Joe remained in the Army until WWII ended.

During the War, he met Dolly DeNome on leave.  At one glance, he told his friend “I’m going to marry her.”  It was love at first sight and a devoted relationship that lasted close to sixty years.  The couple had three children Peggy (William) Contino, Ronald (Rebecca) Gasper and Roberta (James) Adams.  Joe was very proud of his family.  After the war, Joe worked in mills, volunteered with his church and became a part of the State Liquor Store.  He was responsible for opening the first self-serve liquor store in 1959 in Neshannock Township.

Joe was a skilled carpenter. He built his family home on Wood Street in Ewing Park.  He built furniture, made holiday decorations, and loved to work around the house.   Most of his children, and grandchildren have some hand crafted furniture or item he made specially for them.

Joe helped with construction of several Catholic Churches in Ellwood City.  At 102, Joe was still a very active member of Holy Redeemer’s Special Activities Group and Holy Name Society, fundraising for them.

Joe received letters from all over the world asking about Pearl Harbor.  He was featured in an article in Military Magazine, on KDKA TV and PBS. Carrie Underwood invited him to see her in concert a few years ago, but Joe was too ill to attend.  His daughter went and brought him back an autographed picture.   Joe was a beloved member of the community who had a gala celebration for his 100th birthday.  He received letters congratulating him from all over the world.  Ellwood City declared December 7 Joe Gasper Day in perpetuity.

Joe loved his family.  Along with his three children, he has nine grand-children and six great-grandchildren.  He was proceeded in death by his beloved wife Dolly, his parents, his two brothers (Vincent and Michael), his son-in-law William Contino, and many other relatives and friends.