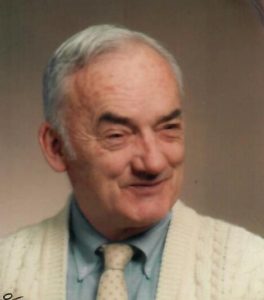 Joseph Manion Ludwig, Sr., of Ellwood City, Pennsylvania, died Thursday, July 2, 2020, in his Ellwood City home following a brief period of failing health, and surrounded by family who loved him. He was born in Magee Hospital in Pittsburgh, PA on January 29, 1933. His father, Louis (Lou) Neal Ludwig, and his mother, Margaret (Peg) Manion Ludwig, hailed from families with a deep history in Carnegie, PA. Joe’s maternal grandfather was two years old when he came to America from Clifton, Ireland (located on the west side of the island), and Joe was proud of his Irish heritage. Joe graduated from Carnegie High School, received his undergraduate degree from Penn State University, and a law degree from Duquesne University.

Joe met his future wife, Ann Craig Ludwig, while attending Penn State. Joe had a big white Buick convertible with red bench seats. He listed on a college bulletin board his willingness to give folks a ride to Pittsburgh on a weekend at a $2.00 fee. Joe remembers Ann being one of six respondents and that she looked breathtaking in a white dress with a yellow flower. Ann sat in the middle of the front bench seat and ran the radio. That encounter was the beginning of a “long ride.” They were married on October 10, 1959, at Saint Titus Church in Aliquippa, PA, and began to raise their family, create Joe’s law practice (Ludwig, Palenti, Wilson and Sullivan) in Pittsburgh, and build a life together that would span sixty years.

Joe was proud of his forty-one-year involvement with Alcoholics Anonymous and was particularly proud of his role in the development of a support group for attorneys involved in the program.

Joe dearly loved spending time with family and friends wherever they gathered – in homes, at “the farm,” at “camp,” on vacations…anywhere there was someone to swap stories with, to hunt with, to play chess with, to play cards with, to eat meals with, or to just enjoy each other’s presence.

While all celebrate “Poppy’s” life and will continue to carry him in their hearts, they will greatly miss his daily presence, his wry wit, and his wonderful stories.

In keeping with Joe’s wishes, there will be no calling hours. A celebration of his life will be held at a time to be announced in the future. The funeral arrangements are entrusted to the Samuel Teolis Funeral Home and Crematory Inc..