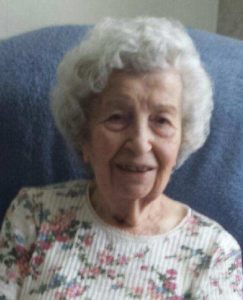 Mrs. Massine was born on September 3, 1919 in Ellwood City to the late Domenico and Bertha Florio (Flowers) Ierace. She had attended Lincoln High School, and is a member of the Holy Redeemer Parish. During World War II, Josephine worked at the U.S. Steel Tube Mill in Ellwood City. She is a member of the Golden Agers. and she enjoyed bingo, bowling and playing cards. Josephine especially enjoyed spending time with her family and grandchildren.

Mrs. Massine is survived by her daughters, Carole (Robert) Vizyak of Chippewa Twp., and Beth (Scott) Hazen of Fombell, her son, Eugene (Debbie) Massine of Randolph, NJ, her grandchildren, Lori Vizyak, Darren (Emily) Vizyak, Jason (Stefanie) Hazen, and Stephanie Massine, and her great-grandchildren, Eric and Peyton Vizyak.. She is also survived by her sister-in-law, Joyce Ierace of Ellwood City, and several nieces and nephews.

She was preceded in death by her parents, her husband, Gene Massine whom she married on July 25, 1941 and passed away on May 2, 1979, her sister, Rose Nocera, and her brothers, Phillip Ierace, Samuel Ierace, Robert Ierace, Eugene Ierace, and Albert Yerace.

Mrs. Massine’s family would like to thank the staff of the Trinity Oaks Care Center, Gateway Hospice, and Steel City Medical Group for the wonderful care that they extended to Josephine.

Memorial contributions in Mrs. Massine’s name may be made to the Autism Warriors of Lawrence County, or to the donors local Humane Society.