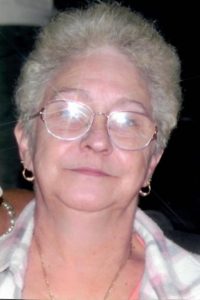 Karen D. Bentel, 71, of Ellwood City passed away on Monday, October 1, 2018 at the UPMC Mercy Hospital in Pittsburgh.

Karen was born on March 31, 1947 in Ellwood City to the late Donald Smith, and Mary McDowell (Smith) Wilson of Ellwood City. For many years Karen worked at Romar Textile in Ellport. She enjoyed coal gardening, sewing, baking, quilt making, and was an active member of the VFW Ladies Auxiliary.

She is survived by her mother, Mary Wilson, her son, Donald (DeAnn) Reese of Ellwood City, her grandchildren, Tyler Boring, Nikki McDowell, Kaiden McDowell, and Azayvien Dennis,  several great-grandchildren, and her step-daughter, Jodi (Jody) Lewis of Ellwood City. Karen is also survived by her sisters, Debbie (Joe) Floreno of Macomb Twp., MI, and Tracie (Tim) Penwell of West Pittsburgh, along with several nieces and nephews.

She was preceded in death by her father, her son, Jarod Craig McDowell, and her brother, Roger Smith.

Family and friends will be received on Saturday from 11:00 am until the time of the Memorial Service at 1:00 pm at the Samuel Teolis Funeral Home, Inc. and Cremation Services with Rev. R. Tod Custer officiating. .