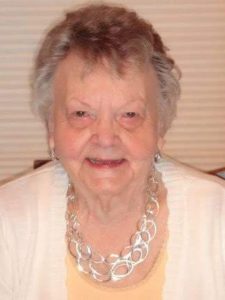 Mrs. Katherine L. Bowden, 94, passed away on Saturday, August 5, 2017 at her daughters residence.

Mrs. Bowden was born on March 30, 1923 in Criders Corners, Pa to the late Walter and Ethel Garvin Slining. She had graduated from the Mars High School. After raising her children Katherine worked as a bus driver for Rhodes Transit for 20 years. She enjoyed going to the Driftwood Senior Center, and was good at needle work and Tole painting.

She is survived by her daughters Pat (Hollis) Stacey of Franklin Twp., Nancy (James) Smith of Franklin Park, and Linda Bemis of Portersville, her sons James Strella of Georgia, and Walter Bowden of Sinnamahoning and his fiancé Melony Harr of Ligonier, her eight grandchildren, and her ten great-grandchildren.

She was preceded in death by her parents, her first husband Paul Strella in 1960, her second husband Walter Bowden in 2000, her daughter Judith Ann Strella, her sister Jeanne Super, and her son-in-law Paul Bemis.

As per Katherine’s wishes there will not be a public service. The funeral arrangements are entrusted to the Samuel Teolis Funeral Home, Inc. and Cremation Services.