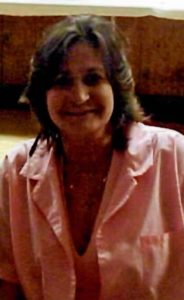 Mrs. Kathleen M. “Cat” Dayton, 56, of Wampum passed away on Monday, November 12, 2018 at the UPMC Presbyterian Hospital in Pittsburgh.

Mrs. Dayton was born on February 28, 1962 in Pittsburgh to Robert and Mary (Doyle) Thomas. She had graduated from high school in Pittsburgh, and worked as an aide in various nursing homes. She is a member of the River of Life Church.

She is survived by her loving husband, Burt Dayton whom she married on October 25, 2002, her mother, Mary Thomas of Moon Twp. her daughter, Kellyann White of Moon Twp., her sons, Nick White and Stephen Dayton both of Wampum, three grandchildren, three brothers, and two sisters.

Family and friends will be received on Tuesday from 4:00 pm until the time of the Memorial Service at 6:00 pm at bthe Samuel Teolis Funeral Home, Inc. and Cremation Services with Rev. Michael Wimer officiating.