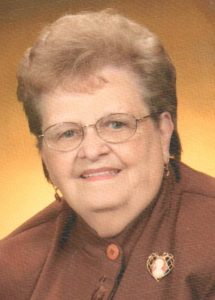 Mrs. Thompson was born on November 1, 1931 in Ellwood City to the late Michael and Margaret Dabranski Lasky. Kathleen is a member of the Lincoln High School class of 1949, and the First Church of God in Franklin Twp.. She also was an avid bingo player.

She was preceded in death by her parents, her husband William F. Thompson whom she married in 1951 and passed away in 1983, her son Eric David Thompson, her grandchildren Darla and Darlene Thompson in December of 1982, and her sisters Gloria Schierbaum, and Margaret Maxwell.

Family and friends will be received on Monday from 9:00 am until the time of the service at Noon in the Samuel Teolis Funeral Home, Inc. and Cremation Services with Rev. Phil Conklin officiating. Interment will be at the Lillyville Church of God Cemetery.

Memorial contributions in Mrs. Thompson’s name may be made to the First Church of God,  1862 Mercer Rd., Ellwood City, Pa 16117.