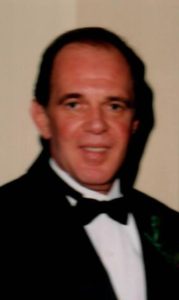 Mr. Nash was born on November 14, 1943 in Ellwood City to the late Larry and Theresa (Macri) Nash. He had graduated from Lincoln High School wit the class of 1961, and served with the U.S. Army Reserves. Larry was the owner of Larry Nash Mutual of New York insurance agency in Ellwood City for many years. He enjoyed golfing and bowling.

He is survived by his daughter, Kirsten Thompson of Poland, Ohio, his sisters, Sandy Fogel of Ellwood City and Nancy (James) Vivo of New Middletown, Ohio, his brother, Eugene “Toofie” (Mary) Nash of Franklin Twp., and many nieces and nephews.

He was preceded in death by his parents, his brother-in-law, Richard “Dick” Fogel, and his half sisters Jean Miller, Theresa Simco, and Marlene White.

Family and friends will be received on Tuesday from 4:00 pm until the time of the Blessing Service at 6:00 pm at the Samuel Teolis Funeral Home and Crematory Inc. with Father Mark Thomas officiating.