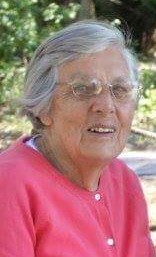 Mrs. Laureen D. DeCampli, 90, of Perry Twp. passed away at the residence of her son, Billy DeCampli in Zelienople on Tuesday evening, March 28, 2017. Mrs. DeCampli was born on January 16, 1927 in Beaver Falls to the late Charles Klear and Clara Gerwig Klear Steffler. Laureen grew up in Fombell on the farm of her loving step-father Bill Steffler and her mother. She graduated from Zelienople High School in 1944. She worked at the GC Murphy Company in Ellwood City. Laureen met her future husband, Nick, at the store when he asked her to help him choose Christmas gifts for his four sisters after returning from Europe in World War II. The gifts she picked were a hit with his sisters and that was the beginning of a wonderful relationship for them which lasted 63 years until his death in 2010. Nick and Laureen had 5 children who were raised in their home on Van Gorder Mill Rd. in Perry Township. Laureen was an amazing cook and baker. She made tons of incredible cookies, cakes, pies, and desserts and always had something good to eat to offer to whoever came to the house. She loved gardening and spending time with her extended family, who meant the world to her. As she aged, she enjoyed doing puzzles and reading-things she hadn’t had much time to do when she was younger. Laureen was also a member of the Holy Redeemer Parish. Mrs. DeCampli is survived by her three daughters, Linda (Charles) Obetts of Annadale, VA, Adele (Andris) Cirkelis of San Francisco, CA, and Diane McCarty of Fort Myers, FL, and her two sons, Domenick William DeCampli of Zelienople, and David DeCampli of Perry Twp., ten grandchildren, two step-grandchildren, and four great grandchildren. She is also survived by her two brothers, Robert M. (Winnie) Klear of Chambersburg, Pa and Lee (Lorraine) Steffler of Fombell, her sister-in-law, Cam Feliner of Ellwood City, as well as numerous nieces and nephews. Laureen was preceded in death her loving, devoted husband of 63 years, Nick, in 2010. She was also preceded in death by her mother Clara Steffler, her step-father William Steffler, and her sister, Ruth Steffler Weiland. Visitation will be held on Sunday from 2-4 and 6-8 pm in the Samuel Teolis Funeral Home, Inc. and Cremation Services. A mass of Christian burial will be held on Monday at 10:00 am in the Holy Redeemer Church. Those attending the funeral mass are asked to meet at the funeral home on Monday by 9:20 am. Interment will follow at the Locust Grove Cemetery. Memorial contributions in Mrs. DeCampli’s name may be made to the St. Jude’s Children’s Hospital.