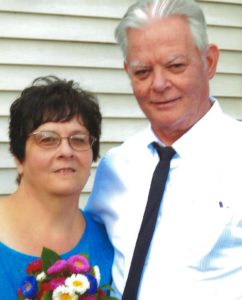 Mrs. Laurie A. Stubler, 62, passed away on Saturday, November 27th, 2021 at the UPMC Jameson Hospital, her spouse, Richard R. Stubler, Jr. joined her in Heaven on Wednesday, December 8th, 2021 from his residence. Both are from Ellwood City.

Laurie was born in Ellwood City to the late Acsente and Joann E. (Neff) Parau. She is a member of the Lincoln High School class of 1977. For many years she worked as a caregiver.

Richard was born in Rochester, Pa to the late Richard R. and Doris Christine (Lynn) Stubler, Sr. on August 10th, 1957. He had graduated from Beaver Falls High School with the class of 1975. Rich worked at an array of things as an independent contractor. He enjoyed playing music, writing, studying history, and watching baseball. Both Laurie and Richard attended the Lillyville Church of God and loved cats.

Rich is survived by his daughters, Jenn Stubler of Beaver Falls and Jessica (Matt) Ciampaglione of Monaca, grandchildren, Adaline, Jonathan, and Dominic, and his sisters, Donna (Tom) Kobylarczyk and Julia (Mark) Wahlton both of Orlando, Fl.

There will not be a public service. Both Laurie and Richard will be inurned at the Lillyville Church of God Cemetery. Final arrangements for both have been entrusted to the Samuel Teolis Funeral Home and Crematory Inc..