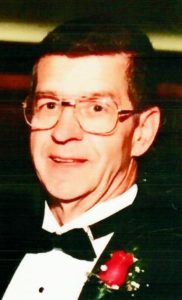 Mr. Loncher was born on November 1, 1929 in Bridgewater, PA to the late Lawrence P. and Dorothy (Pavlinich) Loncher, Sr.. He had graduated from Beaver High School with the class of 1948 and later from the Virginia State Teachers College with a degree in business. He enlisted with the U.S. Army on July 6, 1951 and served with the Company L, 504th Airborne Infantry Regiment until his discharge on November 30, 1953 with the rank of Corporal. He was awarded the Parachutist Badge and the National Defense Service Medal. While growing up Lawrence worked at his family owned business “Loncher Lanes” in Bridgewater as a bartender. Following his service with the Army, Larry worked at FNB Consumer Discount Company in Ellwood City as a manager. While living in Ellwood City he was a member of the Holy Redeemer Parish. He enjoyed golfing, camping, and bowling.

He is survived by his daughter, Karen (Robert) Hauzie of Twinsburg, OH, his son, Steven (Stacy) Loncher of Holly Springs, NC, his grandchildren, Bethany Loncher, Brent Loncher, April Hauzie, and Vanessa Hauzie, and his sister-in-law, Enid Loncher of California.

He was preceded in death by his parents, his wife, Marie A. (McCusker) Loncher whom he married on April 1, 1967 and passed away in 2004, his sister and brother-in-law, Dorothy and Roger Elmer, and his brothers, Matthew and Paul Loncher.

A family visitation will be held on Friday from 10:00 until the time of the Blessing Service at 11:30 am at the Samuel Teolis Funeral Home and Crematory Inc.. Interment will follow at the St. Mary’s Cemetery in Beaver Falls. Due to the current COVID-19 situation those attending the visitation and service are asked to wear a mask and practice social distancing. A Celebration of Larry’s Life will be held later next year.

Memorial donations in Mr. Loncher’s name may be made to the Alzheimer’s Association, or to the Wounded Warrior Project.