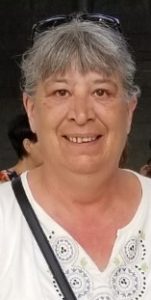 Mrs. Gillespie was born on June 28, 1960 in Ellwood City to the late Joseph C. and Martha Ann (Havern) Gerard. She had attended Lincoln High School. For 25 years, Lori worked as a manager at the CoGo’s in Midland. Her greatest joy in life was her grandchildren.

She was preceded in death by her parents, her sisters, Joyce Gerard in infancy and Cheryl A. Tribuzio, and her mother-in-law, Nancy (Dombeck) Gillespie.

Visitation will be held on Thursday from 2-4 and 6-8 pm and on Friday from 9:00 am until the time of the service at 10:00 am at the Samuel Teolis Funeral Home and Crematory Inc. with Pastor Peggy Suhr-Barkley officiating. Interment will be at the Slippery Rock Cemetery.

Memorial contributions in Lori Jo’s name may be made to the American Cancer Society.