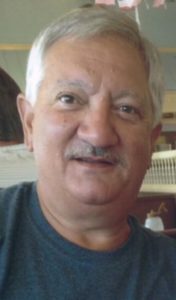 Louis “Lou” Scialdone, 68, passed away on Wednesday, June 5, 2019 at his Florida residence.  He was the husband of Sharon (Geniviva) Scialdone.  They shared 48 years of marriage together.

Louis was born in Ellwood City, PA and was the son of Mary Scialdone of Ellwood City and the late James Scialdone.  He was a 1969 graduate from Lincoln High School and also attended Beaver County Community College.  He was retired from Ellwood Safety Appliance Company where he was a foreman.

Lou attended Victory Family Church.  He enjoyed tailgating at Pitt Football games with his family and close friends.  He will be remembered as being a loving, husband, son, father, grandfather, brother, brother-inlaw, friend and coach.

Lou was proceeded in death by his father, James Scialdone, his in-laws, Albert “Guff” and Betty Geniviva, and his brother-in law, John Geniviva.

Friends and family will be received on Monday, June 17, 2019 at the Samuel Teolis Funeral Home and Crematory Inc. from 3:00 pm until the time of the memorial service at 7:00 pm.