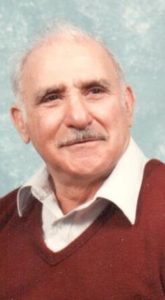 Mr. Froce was born on January 7, 1923 in Ellwood City to the late Antonio and Philomena Wolfe Froce. He enlisted with the U.S. army on March 17, 1943 and served with the 310th Signal Operation Battalion until his discharge on February 21, 1946 with the rank of Private First Class. He was awarded the American Theater Ribbon, Asiatic Pacific Theater Ribbon, Good Conduct Medal, and the World War II Victory Medal. He had worked at the Babcock & Wilcox Steel Mill in Koppel as a conductor for 32 years. He is also a member of the Church of God of Propheoy in Leesburg. Lou enjoyed going to Challenges, fishing, and collecting various items that he would find.

He was preceded in death by his parents, his first wife, Majorie, his second wife, Gladys, his son, Neal, his granddaughter Tennille S. Froce, his sisters, Margaret, Mary, and Rose, and his brothers, William, John, and Neil.

Visitation will be held on Wednesday from 5:00 pm until the time of the Service at 7:00 pm in the Samuel Teolis Funeral Home, Inc. and Cremation Services with Rev. Ron Roudebush officiating. Interment will be at the Locust Grove Cemetery.