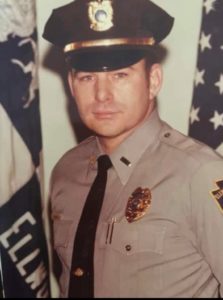 Lt. Jack Arthur Maine, Sr., 78, of Ellport, Ellwood City Pennsylvania, passed away peacefully at home on September 19, 2021 with his devoted wife and family by his side.

The second of four sons, Lt. Maine was born September 2, 1943, at the Aberdeen Proving Ground Army Base in Havre De Grace, Maryland to Emmett T. and Alice Kerr Maine.

Lt. Maine, a Catholic, was a member of the Holy Redeemer Parish, and before its closing, St. Joseph’s Parish in Ellport.

Lt. Maine attended Ellport Primary School and was a a 1962 alumnus of Ellwood City’s Lincoln High School where he excelled in football and track and field.  Lt. Maine played football under Former NFL Coach Chuck Knox and was a lifelong Steelers fan.

Immediately following high School graduation, Lt. Maine enlisted in the United States Army and served during the Vietnam War.  In 1965, at the rank of Corporal, he was honorably discharged.  A short time later, while taking a dinner break from a hunting trip at his family’s camp in Marienville PA, Lt. Maine met the love of his life, Rose Marie Ferraro Maine.  The two were married February 12, 1966 at St. Callistus Church in Kane, PA.  Throughout their 55 years of marriage, anyone who knew Lt. and Mrs. Maine concurred, the two exemplified the epitome of love.

Lt. Maine served on Ellwood City’s Police Department from April 1966 until 1991 when cardiovascular disease forced him into an early retirement.  Lt. Maine was a certified Pennsylvania Police Firearms Instructor and earned an Associates Degree in Criminal Justice from the Community College of Beaver County.   Lt. Maine was a second generation member of the Fraternal Order of Police Lodge #4.  Lt. Maine’s reputation both as an officer and in his personal life was that of firm but fair, he was a man of integrity, a “good man”.

God, family, and service to others depicted Lt. Maine’s life.  His morning routine began with  reading the Bible.  Every meal eaten at home or in public started with a prayer.  Lt. Maine built his family’s home a block from his parents so that his children could maintain a close relationship with their grandparents.  On long weekends Lt. Maine, Rose Marie and their five children traveled to Kane, PA to be with Rose Marie’s family.

Lt. Maine wore many coaching hats working with the youth in his hometown.  In the ring he assisted former boxing greats Chuck Gibbons and Ben Bartle.  Lt. Maine and brother in blue, Officer John Dahl, started the Ellwood City Police Department’s Boxing Club in the basement of Ellwood City’s Municipal Building.  Lt. Maine founded and coached the Wur-Ell-Chiefs Midget Football League for the youth of Wurtemburg and Ellport who, due to transportation issues, would have otherwise not had the opportunity to participate.  Lt. Maine coached Wur-Ell-Wayne Little League Baseball and, because he was opposed to his daughters playing baseball, founded the Ellwood City Little Angels Girls Softball League.

Lt. Maine was an avid hunter and fisherman.  During hunting excursions Lt. Maine wouldn’t enter the woods without first stopping to pray for a safe hunt.  He instilled this practice of faith in his sons and Grandsons.  He took pride in teaching them the importance of hunter’s safety and proudly gifted each of them a hunting rifle.  In addition to hunting, fishing, and spending time with his family, Lt. Maine enjoyed woodworking and could build or fix just about anything.

Family traditions were integral to Lt. Maine.  Holidays were always spent at his home with extended family, friends, and enough food to feed the neighborhood.  Rose Marie would sing and play the piano while Lt. Maine and guests sang along and danced. The celebrations weren’t complete without Lt. Maine and Rose Marie performing their duo rendition of  the “Chattanooga Shoeshine Boy”.  Lt. Maine was the life of every party.  He would tell stories, share riddles, and was the go-to for the infamous wizard card trick. Lt. Maine was a loyal friend to many and would make himself available to help anyone in need.

Lt. Maine was a fierce competitor who imparted on his family the importance of mental toughness and the ability to fight hard but love harder. From childhood through the end of his passing, Lt. Maine fought hard, literally and figuratively.  In his final round it was cancer that finally defeated him.  With Lt. Maine’s watch on earth now over, he is, without a doubt, at the grandest fishing hole in Heaven.

In addition to his parents, Lt. Maine was preceded in death by his youngest brother, Captain Robert C. Maine Sr., SCI, Mercer.

Lt. Maine’s family would like to thank the doctors and nurses from the Butler Veterans Administration and Hope Hospice, and staff at Compassionate Home Health Inc. in New Castle.

Visitors will be received at the Samuel Teolis Funeral Home and Crematory Inc., 309 Spring Avenue, Ellwood City on Thursday from 2-7 pm.  Mass of Christian Burial will be held on Friday at 11:00 am at Holy Redeemer Church with Father Mark Thomas, as celebrant. Interment will follow at the  Portersville Christian Cemetery with full military honors rendered by the Veterans Honor Guard.