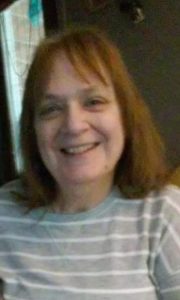 Mrs. LuAnn Houk, 61, of Lake Arthur Estates in Portersville passed away on Thursday, December 28, 2017 at the UPMC Jameson Memorial Hospital.

LuAnn was born on March 28, 1956 in Ellwood City to the late James R. and Anna Mae Graff Piper. She had graduated from Seneca Valley High School with the class of 1974, and from the University of Phoenix with a degree in Health Care Administration. She had worked as a CNA at the Passavant Retirement Community and at the Sunrise Nursing Home in Cranberry Twp. as a medical technician. She is a member of the Word Alive Church, and enjoyed reading and camping.

She is survived by her sons Michael (Dani) Hogue, Russell (Crystal) Hogue both of Ellwood City, and Alan Hogue of Portersville, her step-daughters Sarah Morris of New Castle and Jennifer Houk of Chippewa Twp., her 19 grandchildren, her brother Anthony (Kathy) Graff of Washington, PA, and her companion Ross Peterson of Portersville.

Family and friends will be received on Saturday from 2:00 pm until the time of the service at 6:00 pm in the Samuel Teolis Funeral Home, Inc. and Cremation Services with Rev. Cliff Reynolds officiating.

In lieu of flowers, the family requests contributions be made to the funeral home to assist with the funeral expenses.