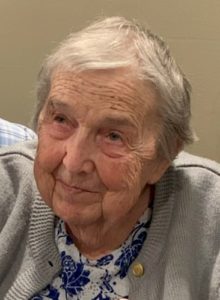 Mrs. Bingle was born in Gustavus, Ohio on April 27, 1928 to the late Louis and Marie (Noble) Davis. She had graduated from the Gustavus High School, and is a member of the Lillyville Church of God. Marcella enjoyed gardening, canning, and crocheting. She will be remembered for her generosity and helping her neighbors.

She was preceded in death by her parents, her husband of 61 years, Robert J. “Jake” Bingle, her son< Daniel in 1953, her son-in-law, David L. Shaw, brothers, Miland, Wilmer, Raymond Davis, and sisters, Martha Newton, Thelma Alborn, and Helen Martindale.

Family and Friends will be received on Saturday, July 10, 2021 from 1:00 pm until the time of the service at 2:00 pm at the Lillyville Church of God with Pastor Dennis Arndt officiating. Interment will be at the church cemetery. The funeral arrangements are entrusted to the Samuel Teolis Funeral Home and Crematory Inc..