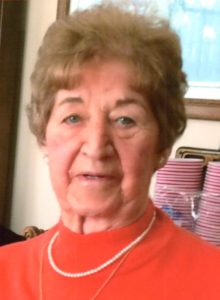 Margaret K. Mitchell, 92, of Ellwood City passed away on Saturday, April 15, 2017 at her daughters residence.

Margaret was born on December 20, 1924 in Ellwood City to the late John and Marie Moran Crespo. She had worked at the Ellwood City Hospital in the housekeeping department, the Ellton Hotel as a cook for several years, Leeds and Northrup in Ellport during the 1960’s, and was a home health care giver for many people in the Ellwood City area.  Margaret also was the manager of Daufen’s Bar and Grille for a year. She was a member of the Beaver Falls Elks and the Turner Club in Beaver Falls, the Eagles club, Hungarian Club, and the Ladies of the Moose in Ellwood City. Margaret also was a member of the Holy Redeemer Parish. She enjoyed cooking and gardening.

Margaret is survived by her daughters, Shirley (Terry) Hill of Shenango Twp. and Michelle Mikosz of Ellwood City, her sons, John (Linda) Norge of Wampum and Sam Norge of New Castle, her seven grandchildren, and her twelve great-grandchildren. She is also survived by her sisters, Sarah Olayer McCready of Wampum, Elizabeth (Bob) Wilks of North Sewickley Twp., and Lucy Thompson of Joplin, Missouri, and her brother, Edward (Donnie) Crespo of Tacoma, Washington.

She was preceded in death by her parents, her first husband Anthony Norge, her second husband John Mikosz, her companion King Daufen, her sisters, Marie Crespo and Katherine Crespo, and her brothers, Charles, Alfred, Joseph, John, Philip, Henry, and Thomas Crespo.

Family and friends will be received on Monday, April 24, 2017 from 5:00 pm until the time of the Blessing Service at 7:00 pm in the Samuel Teolis Funeral Home Inc. and Cremation Services. Inurnment will be at the Holy Redeemer Cemetery.

Memorial contributions in Margaret’s name may be made to the Holy Redeemer Social Services.