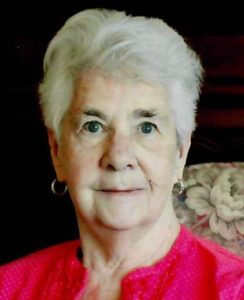 Mrs. Malush was born on January 18, 1937 in Pittsburgh, Pa to the late Stanley and Helen (Harbin) Kasperowski. She had graduated from the Bridgeville High School with the class of 1955. For many years Marjorie worked for the Army Corp. of Engineers at the Federal Building in Pittsburgh where she was in charge of the travel department. Following her retirement she became a volunteer with the Ellwood City Hospital Auxillary. She enjoyed jigsaw puzzles, flower gardening, country music, and especially spending time with her family and grandchildren.

She is survived by her daughter, Michele (Mike) Doban of Harmony, her sons, Tom (Debbie) Malush of Baldwin, Eugene Malush of Baldwin, and Paul (Nancy) Malush of Smock, PA, nine grandchildren, one great-grandchild, her brother James Kasper of Bethel Park, and her sister-in-law Blanche Kasperowski.

She was preceded in death by her parents, her husband John E. Malush whom she married in June of 1960 and passed away in 1986, her brother Stanley Kasperowski, and her sister-in-law Mary Kasper.

As per Mrs. Malush’s wishes there will not be a public visitation or service. The funeral arrangements are entrusted to the Samuel Teolis Funeral Home and Crematory Inc..

Mrs. Malush’s family would like to extend a special thank you to the Northview Estates staff for the wonderful care that they extended to her.