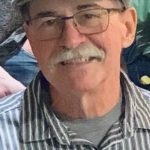 Mark was born in New Castle on February 10th, 1958 to the late Donald L. and Betty Ann (Bixler) Dover. He had graduated from Laurel High School with the class of 1976. Following high school, Mark enlisted with the United States Marine Corps on December 7th, 1976 and served until his discharge on March 19th, 1982 with the rank of Corporal. Mark then worked at Inmetco for seven years and then at the Ellwood City Forge as a heat treat supervisor. He enjoyed motorcycles and watching football with his sons. along with fixing things around his house.

He was preceded in death by his parents and his nephew Mark DiCampello.

Visitation will be held on Wednesday from 3:00 pm until the time of the Service at 6:00 pm at the Samuel Teolis Funeral Home and Crematory Inc. with Rev. Matt Bupp officiating.

Memorial contributions in Mark’s name may be made to the; Family House, familyhouse.org.