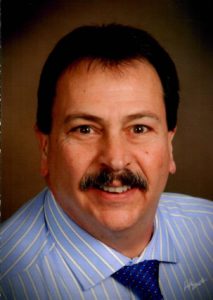 Marlon S. “Molly” Barsotti, 60, of Ellwood City passed away on Saturday, November 2, 2019 at the Good Samaritan Hospice in Beaver.

Marlon was born on December 5, 1958 in Ellwood City to the late Frank M. and Virginia A. “Ginny” (Lunardini) Barsotti. He had graduated from Lincoln High School with the class of 1976, and from Penn State University with a degree in Forestry. He, along with his brothers and sisters, worked for the family business (Ellwood City Candy Co.) for over 35 years. He attended the Christ Presbyterian Church. Molly was a member of the Ellwood City Jay Cees, Ellwood City Wolves Club, and the Sons of Italy Lodge #608. He, along with his wife, had served as a host for an Italian exchange student, Dr. Sara Piloni, who became a member of the family. For a few seasons he coached Riverside Girls Slow Pitch Softball. Molly enjoyed motorcycles, shooting sports, but most of all being with his family and friends whom he always had a good time with.

He is survived by his wife, Marilyn (Orr) Barsotti whom he married on May 31, 2003, his son, Jonathan Bucci of Pittsburgh, his mother-in-law, Dorothy Orr of Franklin Twp., his sisters, Janice (Charles) Pollina of Doyelstown, Pa and Jean Ann Barsotti of Ellwood City, his brothers, Matthew (Kitty) Barsotti of Lancaster, KY, Martin “Doc” (Rose) Barsotti, Michael “Mickey” Barsotti both of Ellwood City, his sister-in-law, Mary Ellen Barsotti of Danville, KY, and his brother-in-law, Mark (Jackie) Grimm of New Castle. He is also survived by his nieces, nephews, great nieces and great nephews.

He was preceded in death by his parents, his sister, Joemma Grimm, his brother, Mark Barsotti, and his father-in-law, John Robert Orr, Jr.

Visitation will be held on Wednesday from 1-3 and 5-8 pm at the Samuel Teolis Funeral Home and Crematory Inc. and on Thursday from 10:00 am until the time of the service at 11:00 am at the Christ Presbyterian Church with Rev. R. Tod Custer officiating. Interment will follow at the Holy Redeemer Cemetery. Members of the Ellwood City Wolves Club are asked to meet at the funeral home on Wednesday by 7:45 pm to conduct a Wolves Club service.