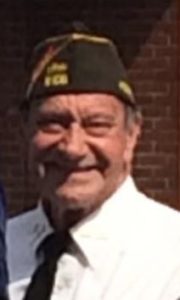 Martin L. “Marty” Seman, 76, of West Pittsburgh passed on Tuesday, November 19, 2019 at his residence with his loving family at his side.

Mr. Seman was born on July 28, 1943 in Mahoningtown to the late Michael and Edith (Perrotta) Seman. He had graduated from New Castle High School with the class of 1962. He enlisted with the U.S. Navy on June 27, 1962 and served on the U.S.S. Oglethorpe until his honorable discharge on August 26, 1966. Following his service with the Navy, Martin worked for Penn Power for 35 years mainly as a welder. He is a long time dedicated member of the Beaver/Lawrence County Veterans Honor Guard and the VFW New Galilee Post 8106.Post. His greatest joy was spending time with his grandchildren, nieces, nephews, and his close friends.

Family and friends will be received on Thursday from 3:00 pm until the time of the service at 6:00 pm at the Samuel Teolis Funeral Home and Crematory Inc. with Rev. Matt Bubb officiating. Members of the Veterans Honor Guard are asked to meet at the funeral home on Thursday by 5:50 pm to conduct full military honors.