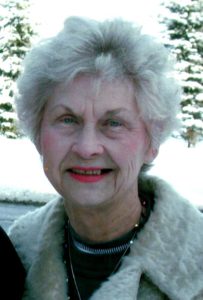 Mrs. Babin was born on December 30, 1920 in Pittsburgh to the late Nicholas and Kensena Stec Batz. She had graduated from Oliver High School in Pittsburgh. Mary was a member of the St. John’s the Baptist Orthodox  Church in Ellwood City. For many years she volunteered at the Red Cross Blood Bank in Ellwood City. Mary was also a member of the Connoquenessing Country Club, and enjoyed swimming, golfing, and bowling.

She is survived by her two daughters Barbara (Donald) Ricker of Grand Rapids, Minnesota and Diana (David) Loadman of Bend, Oregon, her grandchildren, Shawn Hardie, Sherri McHenry, Kimberly Tatum, and Renee Peters, and her ten great-grandchildren.

She was preceded in death by her parents, her husband Michael T. Babin whom she married on September 28, 1941 and passed away on February 20, 2001, and her brothers John Batz and Michael Batz.

A private service will be held for the family. Interment will be at the Locust Grove Cemetery. The funeral arrangements are entrusted to the Samuel Teolis Funeral Home, Inc. and Cremation Services.

Memorial contributions in Mrs. Babin’s name may be made to the Ellwood City Area Public Library.