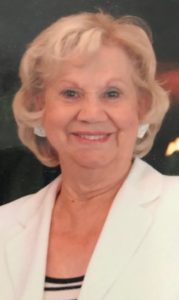 Mrs. Mary “Dolly” Frances Lucas  passed away on Wednesday, February 16, 2022, surrounded by her family,  at The Windsor in Canton, Ohio.

Dolly was born on September 3, 1929 in Ellwood City, Pa to the late Alfonso and Philomena “Mae” Barbati. She was the youngest of six children and grew up in Ellwood City.  She graduated from Lincoln High School in 1947. She married the love of her life, Frank Lucas, on November 8, 1952.  Together, they had three children and spent 69 loving years together.  Anyone who knew Dolly saw her selfless dedication, compassion, and love for her family.  She dedicated her life to raising her children and later began her career as an account manager with Schottenstein Corporation.  She earned the title of top account manager  while employed with the company.  She retired in 1998 and moved To Canton, Ohio. She enjoyed dancing and traveling with her husband.  She devoted her later years to her grandchildren by attending every dance recital, baseball game ,pageant and skating event.  These memories will forever live in their hearts.

She was preceded in death by her husband, Frank, son, Frank Bradford Lucas in infancy, sisters, Frances Perrone and Louise Mazzant, and brothers, John Barbati, James Barbati and Joseph Barbati.

The family will receive friends on Tuesday, February 22nd  from 10 am until the time of the Blessing Service at 1 pm at the Samuel Teolis Funeral Home and Crematory Inc. with Father Mark Thomas officiating. Interment will follow at the Holy Redeemer Cemetery.