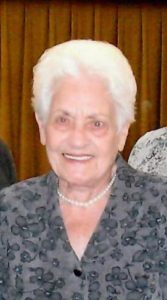 Mrs. Majors was born on October 31, 1924 in Follansbee, West Virginia to the late Domenico and Nancy (Diserio) D’Aloiso. She had graduated from Lincoln High School with the class of 1943. During World War II, Mary worked at the Ellwood City Tube Mill, then at Bach’s in Portersville as a book keeper, Bobbie Brooks Clothing Store in Butler, the Ellwood City Knitting Mill, and R&D Logistics in Harmony. She is the oldest and one of the original members of the Christian Missionary Alliance Church in Portersville, where she also was the church pianist. She enjoyed playing Scrabble, and was an avid Hand and Foot card player.

Mrs. Majors is survived by her daughters, Diane (Mark) Shaner of Ellport, Linda (Douglas) Harris of Etowah, NC, and Brenda (Larry) Lumley of Chicora, Pa, her son, Dennis Majors of Ellwood City and his companion Loretta Spielvogel of New Castle, her eight grandchildren, eighteen great-grandchildren,  one great-great-granddaughter, and four step grandchildren. She is also survived by her sister, Norina Owens of Franklin Twp.

She was preceded in death by her parents, her daughter-in-law, Deborah Majors, her sisters, Emily Greco, Esther Maggiano, and Gloria “Gabby” Waite, and her brother, George D’Aloiso.

Visitation will be held on Thursday from 5-8 pm, Friday 5-8 pm, and on Saturday from 9:00 am until the time of the service at 10:00 am at the Samuel Teolis Funeral Home, Inc. and Cremation Services with Rev. Robert Frye Officiating. Interment will follow at the Pleasant Valley Cemetery in Slippery Rock Twp..