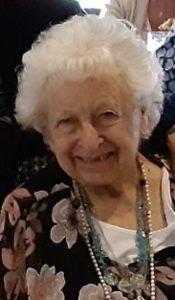 Mrs. Mary Lou (Rocco) Mercuri, 92, of Ellwood City passed away on Thursday, September 2, 2021 at the Passavant Retirement Community in Zelienople.

Mrs. Mercuri was born on December 14, 1928 in Ellwood City to the late John G. and Carmel (Conti) Rocco. She had graduated from Lincoln High School with the class of 1946 and was a member of the Top 10 of her class. She had worked at Gerson Jewelry Store in Ellwood City as a sales and repair person, the Ellwood City Knitting Mill, Aetna Standard Engineering Co. as a secretary and accounts payable, and retired from Universal Rundle in New Castle as an Executive Secretary. Mary Lou belonged to the Holy Redeemer Church and sang in the church choir. She enjoyed dancing, cooking, mushroom hunting, and going to Challenges and Golden Agers.

She is survived by her daughters, Donna Worrel of Sewickley, Lynne (Bob) Gallaher of North Sewickley Twp., and Marianne (Gary) Shiwarski of Robinson Twp., sons, John (Sherrie) Mercuri of Summerville, SC, and Vincent H. (Jane) Mercuri, Jr. of West Deer Twp., ten grandchildren, and sixteen great-grandchildren. She is also survived by her brother-in-law, Steve Chinchi of Ellwood City, and many nieces and nephews.

She was preceded in death by her parents, husband, Vincent H. Mercuri, Sr. whom she married on August 28, 1948 and passed away on June 1, 1997, son-in-law, Bud Worrel, sisters, Louise Nardone, Barbara Teolis, and Evelyn Chinchi, and brother, Patsy Rocco in infancy.

Contributions in Mrs. Mercuri’s name may be made to the Alzheimer’s Association, or to The Basilica National Shrine of the Immaculate Conception.