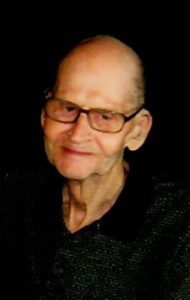 Mr. Koch was born on June 29, 1925 in Ellport to the late George and Pearl (Deemer) Koch. He had graduated from Lincoln High School. Melvin enlisted with the U.S. Army on January 27, 1949 and served with the Company B 503rd Military Police at both Fort Knox and Fort Bragg until his discharge on August 19, 1949 with the rank of Private First Class. He had worked at National Plumbing in Ellwood City for 22 years, and then at the Ellwood City School District, Hartman and Perry Elementary Schools as a custodian for 20 years retiring in 1989. He is a member of the First United Presbyterian Church in Bridgewater. At the age of 14 he started raising homing pigeons and continued to do so throughout his life time. He enjoyed the outdoors, western movies and music, but most of all spending time with his family especially his grandchildren.

He is survived by his daughters, Judith Koch of Cranberry Twp. and Lisa Koch of Ellwood City, his sons, Dennis M. (Lauri) of Coral Springs, FL and David M. Koch of Rochester and his companion Debbie Jones of Aliquippa, and his grandchildren, Derek A. Koch, David M. Koch, Jr., and Matthew R. Koch. He is also survived by his sister-in-law, Ann Lenzi of Butler and several nieces and nephews.

He was preceded in death by his parents, his wife, Lena (Rosellini) Koch whom he married on July 15, 1950 and passed away on December 17, 2003, his brother, Robert Koch, his sisters, Margaret Weingartner, Mable Becker, and Agnes Homner, his niece, Marcy (Rosellini) McKitten, his nephew, Doug Weingartner, his mother and father-in-law, Alfredo and Juidita Rosellini, and his brothers-in-law, Lou and Rick Rosellini.

Visitation will be held on Thursday from 2-4 and 6-8 pm and on Friday from 10:00 am until the time of the service at 11:00 am at the Samuel Teolis Funeral Home and Crematory Inc. with Rev. Bill Silver officiating. Interment will follow at the Holy Redeemer Cemetery. Members of the Veterans Honor Guard are asked to meet at the funeral home on Friday by 10:50 am to conduct full military honors.

The family of Melvin Koch wishes to extend special thanks for the wonderful care given by by the staff at Providence Care Center. We also extend a Thank You to all the wonderful friends and patience that made Melvin feel so special.