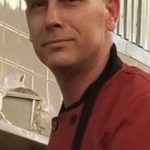 Michael G. Baxter, 50, of Ellwood City passed away on Thursday, September 8th, 2022 at his residence.

Michael was born In Ellwood City on October 7th, 1971 to Alvin “Jerry” Baxter and Pam (Oliastro) Braumbeck. He had graduated from Lincoln High School with the class of 1989. He had worked as a cook at Eppinger’s in Portersville, Harmony Inn in Harmony, Marty Suburban in Cranberry Twp., and most recently for Breaking Bread and 2nd Ward Sanctuary in Ellwood City. Michael enjoyed cooking, kayaking, fishing, and cats.

He is survived by his mother and step father Pam and Wesley Braunbeck of Rochester, sisters Michele Baxter (Carl Smith) of Ellwood City and Shannon (Jason) Curry of Allison Park, brother Steve Baxter, and several nieces and nephews.

His father preceded him in death.

Following Michael’s wishes there will not be a public service. Final arrangements are entrusted to the Samuel Teolis Funeral Home and Crematory Inc..