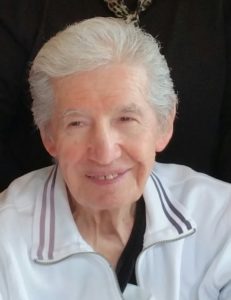 Mr. Sera was born on May 7, 1921 in Ellwood City to the late Benardo and Damiana (Losacco) Sera. He had graduated from Lincoln High School with the class of 1939. He enlisted with the U.S. Army on August 7, 1942 and served with the Service Battery 766th Field Artillery Battalion until he was discharged on November 11, 1945 with the rank of Private First Class. He was awarded the Good Conduct Medal, Victory Medal World War II, American Theater Ribbon, and the European African Middle Eastern Ribbon with 2 Bronze Battle Stars. Following his service with the Army, Michael worked at the U.S. Steel Tube Mill in Ellwood City for 30 years and in Rochester for 1 year. He then worked for the Pennsylvania Liquor Control Board for 8 years at both the Ellwood City and New Castle State Store. While living in Ellwood City he was a member of the Holy Redeemer Parish. Michael enjoyed golfing, fishing, and spending time with his family.

He was preceded in death by his parents, his wife, Sandra “Sandy” (Curtis) Sera whom he married on September 29, 1958 and passed away on June 19, 2014, his granddaughters, Janet Barton and Jennifer Orock, his grandson, Jimmy Barton, and his sisters, Christine Casciato and Annie Rubino.

Visitation will be held on Friday from 3-7 pm and on Saturday from 10:00 am until the time of the Blessing Service at 11:00 am at the Samuel Teolis Funeral Home and Crematory Inc. with Father Mark Thomas officiating. Interment will follow at the Holy Redeemer Cemetery. Members of the Veterans Honor Guard are asked to meet at the cemetery on Saturday by 11:30 am to conduct full military honors.

Memorial contributions in Mr. Sera’s name may be made to the American Cancer Society.