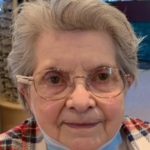 Michele was born on September 27th, 1947 in Ellwood City to the late Clayton and Virginia (DiFrischia) Daufen Sr.. She had graduated from Lincoln High School with the class of 1965, and attended the Wurtemburg  United Methodist Church. Over the years she had worked at Heraeus, Fotia Bros., Allsy Lighting, Airway Industries, and the Ellwood City Knitting Mill.

She is survived by her sons, Samuel (Tammy) Burton of New Brighton and Thomas Burton of Houston, Texas, grandchildren, Amber, Elizabeth, Samuel, Joshua, and Natalia, great-grandchildren, Landon Cline and August “Gus” Shew, and her sisters, Andrea Daufen and Kimberly Jo Daufen both of Perry Twp..

She was preceded in death by her parents and her brother Clayton “Skip” Daufen Jr..

As per Michele’s wishes there will not be a public service. The final arrangements are entrusted to the Samuel Teolis Funeral Home and Crematory Inc.. Inurnment will be at the St. Mark’s Cemetery in Franklin Twp..

To everyone who ever knew me “So long” from Michele or who some called Mike.